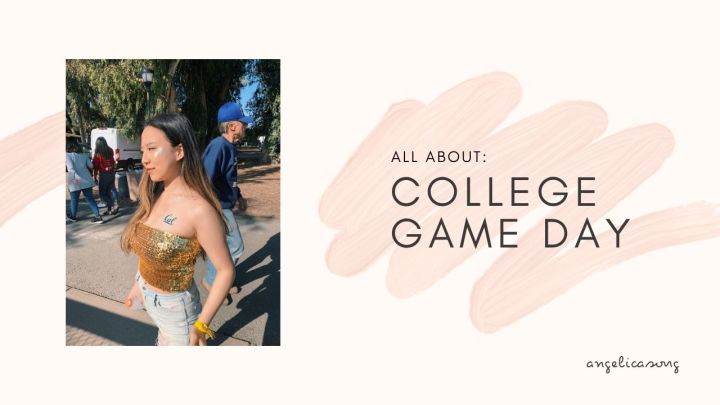 Welcome to the land of sweat, unknown body fluids, chaos, and good memories: college game days. This is my experience of greek game days at UC Berkeley. And, from what I’ve heard from friends at other schools, it works pretty similar. Remember, you don’t have to be in Greek life to go to parties or party at all. Tons of school clubs and organizations throw their own things and you can just have some fun with your friends too!


I’m not in greek life (which makes it harder), but keep reading to learn about my experience with greek life parties without being in greek life: what goes on, getting in, and what to wear.

Game days are mostly in the fall. Unless your school is super huge on basketball (Cal is not idk why). We have Cal Day in the spring which is another big party day. Generally, the biggest ones at Cal are in the fall: first game, USC game, Stanford game…. but they’re all fun! Btw, sororities don’t throw parties — only frats can (sexist, I know). So they’re all at frat houses.

Frat houses are pretty gross not going to lie. It’s basically an enclosed space filled with unknown liquids (pee, alcohol, throwup, sweat) and college students and music. Berkeley’s “Greek row” is not really a row, but more of a regions near Piedmont Ave — area near Memorial Stadium and I-House. Parties start times vary depending on what time the game begins. Earlier games, means earlier parties and vice versa. Some people go to the game, others just party lol.

There should be a section of the house the guys are giving out drinks. Frats have a budget to fund these types of things. Generally you’ll see them either handing out beers or pouring out boxed wine. I want to say that these are safe to drink since you’re seeing where it’s coming from. But, again be careful where you get your drinks. If some frat brother takes you into another rooms with friends and has his own stash of drinks — could be clean or could be laced with drugs. I have friends that have gotten drinks laced with drugs in them. Thankfully no one was sexually assaulted, but they were extremely sick: throwing up, dizzy, memory loss. Please be careful and watch your limits!

The easiest way to get into Greek frat house parties is by being in Greek life. Frats will pass out bids (bracelets) to frats and sororities. Not all frat houses gives bids to every sorority (elitist superficial crap I know). So if you’re like me and you’re not in Greek life this is what you can do. I’ve done all three of these below and successfully gotten in every time. It also helps to look spirited and you know.. like you want to be there lol.

I personally only went out for the big ones so cal day, usc game, big game so I went not over the top, but lots of glitter and a little e x t r a, since these are the days that people go more all out. But, for normal game days, people dress up in a range: anything from oversized Berkeley shirt and shorts, or full on yellow and blue overalls. I don’t know if this is just Berkeley, but a lot of Berkeley sorority girls sometimes like to dress up in that “ugly/troll aesthetic” if you know what I mean. Like you know, socks and sandals, troll sunglasses, but all on theme of yellow/gold and blue.

TBH no one really cares what you wear, but it’s just fun to dress up and be spirited and take tons of cute pictures. Girls can wear crop tops, jerseys, overalls, etc! People get really creative. Have a pair of game day shoes you know you can ruin! It’ll get gross – trust!

before hand & what to bring

People like to pre-game with their friends so they don’t have to drink whatever cheap alcohol is giving out at the frat houses. This is also a safe way to go about things so you know where your drink is coming from.